Takeaway:  The more congruent a gesture is with what is being learned, the better you’ll remember it.

Increasingly, we interact with our electronic devices in many ways beyond simple mouse clicks and touch screens. Our devices are equipped with 3D cameras and motion sensors. Pointing, waving, smiling, grabbing are all gestures that we will soon (if not already) be able to use to make choices and play games with our phones, computers and game consoles.

But what is the point of About including different movements as user input? It’s healthier for couch potatoes, for sure, plus a lot more fun (the topic in Part 2 of this blog series). Who doesn’t prefer karate-chopping their opponents over pressing a button? What’s more, according to recent research, physical movements can actually cheap jerseys improve learning under certain conditions.

Embodied Cognition is a new field of study founded on the principle that the mind and body are inextricably linked; one affects the other. While most of us believe that we move because our brain tells us to, Embodied Cognition suggests that actions can also affect our thoughts, emotions, and even our decisions. The mere physical act of extending our arm toward a chocolate bar can influence how much we think we like it, whether world! we want it, or how valuable it is to us!

Equally importantly, our ability to remember is influenced by body movements. When was the last time you tried to explain something without using your hands? We naturally use our hands to help us think and remember. This is because our hand gestures, as well as other physical movements, actually make it easier for our brain to retrieve memories.

According to Embodied Cognitive research, certain physical actions help memory more than others. The type of movement should be Résidence meaningfully related to the material. For example, if an educational app is created to teach children how to tell time on an analog clock, users might move their arms in ways that resemble the clock face (i.e., one arm is used as the minute hand and one arm as the hour hand). Alternatively, an addition app in augmented reality could instruct children to grab virtual items with each hand, then move their hands together to combine the objects. For movements related to the content of what is being taught, (which scientists call congruent gestures), memory is better compared to unrelated movements or no movements at all.

On the other hand, adding incessant tapping or lots of movement to an app may reduce your memory for the information. Because of a concept psychologists call cognitive load, too much physical action wholesale jerseys can interfere with making memories. In other words, physical activity should be integrated sparingly and with specific intent Burning to provide the maximum learning benefit. 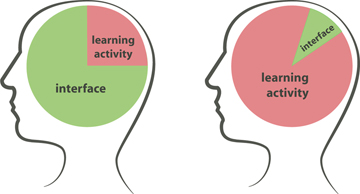 Last year, Legacy Games developed an app for children that used gestures as the main form of interaction – Crayola Bubbles.  Using the Intel RealSense 3D camera, which supports the use of different interfaces, Legacy incorporated multiple movements into the minigames. The child can pop bubbles, drag and release bubbles to paint coloring pages, and pinch two bubbles together in order to blend their colors. In theory, having the child use their hands to drag and combine bubbles of different colors together SHOULD make it more likely that they remember the resulting new color, e.g., red and blue make purple.  I would have loved to test this hypothesis but alas, we ran out of time.

As our industry explores new ways to communicate with our devices, we should also cheap jerseys consider how these changes will impact the way we process information, feel, learn, and remember. HOW we interact turns out to be very important. Stay tuned for more about gestures and app design in the next installment of The Mind-Body Connection.